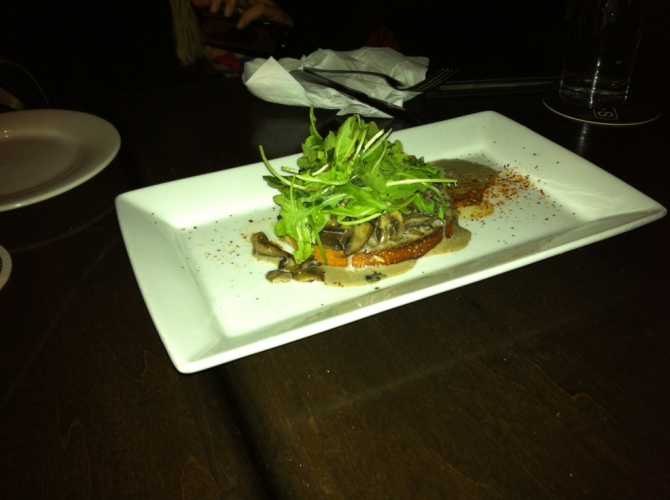 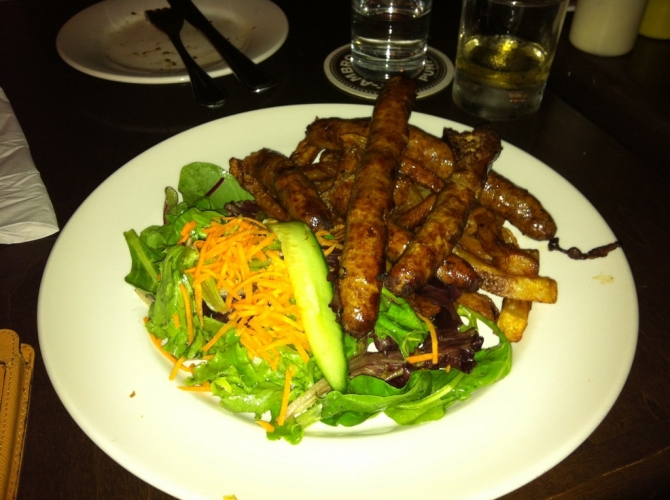 From upscale places to those mysterious holes in the wall, basically if it’s packed with flavor that I want to try. Here is one such place: NYKS Bistro Pub

The menu has a wide assortment of options. In terms of pub style, there’s a variety of poutines and burgers, while on the bistro front, there are salads, tartars, mussels and homemade sausages. They also had some attractive specials of the day written on blackboards throughout the restaurant, these included ostrich and bison burgers (we weren’t adventurous enough to try them). Prices were fair with entrées ranging from 5$ to 13$ and mains ranging from 11$ to 19$.

The Setting: It was a chilly October night but the restaurant was so packed that even the terrace was open. It was a warm and inviting atmosphere; we were lucky to have made reservations as others looking for a warm meal that night were turned away at the door. We were seated at a table next to a large window that opened up on to the terrace. It was nice to have some fresh air but it was bit chilly to have an open window in late October.

The Food: I ordered the seasonal mushroom bruschetta, which ended up being my favorite dish of the night! Sautéed mushrooms in a creamy herb sauce topped with arugula on a slice of baguette. The arugula added the perfect amount of pepper to the dish. I will definitely recreate this at home as it was simple and packed with flavor. As a main course, I had the homemade lamb merguez sausages, which came with fries and a salad. The lamb was delicious; it had a nice bled of spices, but it was a bit dry and not as juicy as expected. My friends ordered the BBQ pulled pork burger & the beef burger which came with a white BBQ sauce, and a side of fries and salad, but those were a bit overcooked.

Overall: NYKS was an average experience, but it had the potential to be great. The food was good, it had a great atmosphere and we all agreed that due to its convenient location, we would go back if we were in the area. Maybe next time one of us would be bold enough to order the ostrich if it’s still on the menu!